Let’s flashback to some more 1983 New Brunswick bars, and the bands that played there.

The heady music scene in the New Brunswick bars inspired me to write this article back in 1983.  I can see many parallels between the New Brunswick scene in the 80’s, and the Asbury Park scene of today. This segment (part 4 of this previously unseen story), shows one reason for that.  Let’s meet Pat Fasano–in 1983 he was proprietor of the newest club in town, Patrix. Today, he is owner of three unique bars in downtown Asbury Park, which make up the Complex.  Read on.

Located at the other end of town, near the Douglass College campus, Patrix (at Handy and Throop Streets) has only been open since this past New Year’s Eve.

“I think there’s a lot of good original talent in this town,” says co-owner Pat Fasano.  “The reason I opened this club is to give them a place to perform. I grew up in New Brunswick and I always had to drive out of town, to New York or Philadelphia, to see good entertainment.”

Somewhat bigger than the Court Tavern, Patrix has a low admission policy: two dollars on weekends, one dollar on band nights during the week, and free on Sunday and Monday when deejays from WRSU spin records.

“I think the addition of Patrix to the scene is a real help,” says WRSU’s Matt Pinfield.  “Variety stimulates the scene.  The more clubs there are, it gives the bands a chance to grow and progress more.”

Patrix is more in the nightclub genre than the Court’s house party atmosphere, making both clubs a must to experience. The new club is decorated in an art-deco style, with prints and old movie posters on the wall. “We’re trying to get a little classier,” Fasano says. “More of a New York atmosphere.”

Patrix’s kitchen will open at the end of May.  “My philosophy on food–bar food–is that I’m in the club business to sell alcohol, not food. I want good quality, a real simple menu. I just would be interested in breaking even.”

“I’m real comfortable in my crowd, ” says Pat Fasano. “It’s not at all a young crowd.  I bring in a good class of people between twenty and early thirties. I think I get a lot of local people.”

The Patrix crowd certainly seems comfortable in this new nightspot.  As at the Court tavern, the dance floor is crowded with people enjoying themselves.

“Patrix is my favorite bar in New Brunswick,” says Dani Petroni, leader of D.P. & the Greys. 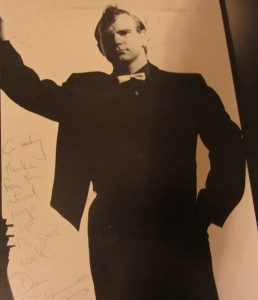 D.P. and the Greys have been together for a year and a half, and are the first New Brunswick based band to put out a full album of original material. “If You Really Love Me . . . You’ll Kill yourself” (on independent “Grey Boy” records) was released in April, and contains seven Dani Petroni songs. D.P. calls his music “no wave–a mix of rhythm and blues, funk, reggae, and rock and roll”. D.P. and the Greys may possibly be the only band in New Brunswick with a horn section–and they are definitely worth checking out.

“Our music is a little avant garde on top,” says D.P.  “I like to take dance music and add things to it.  Open up a person’s ear so they’re being subjected to different music and they don’t know it.”

“The songs all have story lines. People write party songs, but I try to leave a message. You can still party to them, but there’s a test, too.”

“New Brunswick has been my testing ground for the last year and a half. If it’s a sample of the potential of this band, then we’ll do well.  We’ve got a  following in New Brunswick . . .  They’re called ‘Grey People'”.

No matter how large a following a band has, putting out an independent record is difficult financially. Most original musicians have to take day jobs just to support themselves. Grey’s business manager Dan Pollera says that only the combination of D.P.’s technical experience, enabling him to cut corners in the studio, and Pollera’s business know-how made the album possible.

“We spend only $4000 to get the record to this level, and still maintain the quality of a $60,000 record,” says Dani Petroni. “My thing is to spend minimum amounts and get the greatest results.”

“Record companies want you to put out your own independent label, and then if it does well, they’ll take you on,” says Frozen Concentrate’s Tina Maschi. “They’re not taking the risk anymore.”

Right now, Dani Petroni describes the main goal of D.P. and the greys as getting their music to different kinds of people, “not just a certain group”. He would like to tour Europe within the year, and eventually get to the point where they can make a living from their music. However, at present money is not the main objective.

“If I was into making money, I would have become a dentist, ” says D.P.

COMING UP IN PART 5: We’ll finish it off with Shadow Page, the Melody Bar, and what’s ahead for New Brunswick (or what we thought was ahead in 1983!) Visit our blog to read the ending!

Still need to read parts one, two, or three? Visit the links here!