Did you ever want to get in your time machine, cruise the circuit,  and visit those long gone Asbury Park clubs?

I recently discovered a magazine from 1977. “Intune”, billed as “young New Jersey’s entertainment magazine”. This was issue number 1. Did they every have another issue? I couldn’t find any information. But I was fascinated by this article on the Asbury Park clubs and the Boardwalk. So let’s take a trip back to fall 1977, and see what’s happening in Asbury Park.

There’s this little game, called “Fascination”, that you can play all night for so cheap, you wouldn’t believe it. The “Hungry Lion” and the “Rainbow Room” are open for business.  The Senior Citizens are having a convention. The Baby Parade is coming to town. The air smells real.  The chili dogs are great. The ocean is cold, but the music’s hot. I’ve been away too long.

The Boardwalk feels good under my feet. The monster Convention Hall and Casino Arena rise out of the sea, advertising coming attractions. Garcia, the Kinks, Heart, Commander Cody, Climax Blues Band, Utopia. This is Asbury Park, decaying queen of the Jersey Shore, mother of Bruce Springsteen and the Asbury Jukes, home of rock and roll. It pours from every radio, every hamburger stand, from the roller coaster, and the ferris wheel.  Kids hang outside the “Stone Pony’ doing their Jukes imitations. Locals reminisce about how Bruce always used to play there, and that coffee house over the shoe store on Main Street. Last week, Bruce danced on the bar at “Guilio’s”, they say. I look for Crazy Janie, and she’s everywhere. Southside Johnny blares from the beach, and I know it is the way rock and roll was meant to be played all along.

We decide to sit around at “Guilio’s South”, a bar down the street from the “Pony”. They’re real nice there, and besides, the band is playing the Doors. We’re all from New Jersey, except the drummer from a band that plays the night show, and the photographer, who’s from Panama. Disco is dead, we all agree. We eat heavy metal for breakfast. Manager Mike Nesbihili states proudly that his club has never been anything but rock and roll.  One the reasons disco is a drag, he says, is “because you have to spend a hundred bucks before you even step out of the house. Give a guy a pair of jeans and a t-shirt, and you got money in your pocket. We’re not as trendy as they are in the City. The kids know what they like, and they don’t go for every new craze that comes along.” They won’t be bullied. High energy rock and roll is what they want, and that’s what they get. “There’s a lot of talent around”, Mike says, “a lot of things happening.” At Guilio’s they try to be a showcase, combining bigger names like Leslie West, Rick Derringer, Tommy James, Brownsville Station, and Mick Ronson with local draws and recently signed contract groups. There’s rock and roll all afternoon.  Rock all night. Love me two times.

STAY TUNED FOR PART TWO OF THIS ARTICLE:  Changes are afoot! The city of Asbury Park wants to stop all live music. Will they succeed? Read part two here.

Do you have any info on “Intune” magazine or author Carol Maso? Please let us know!

Check in at our vintage fashion blog, for more great articles, coming soon. 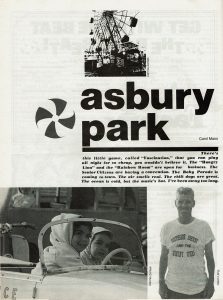