Bettie Mae Page gets her own page in our series on fashion icons!

Bettie was born in Nashville in 1923. She had a rough childhood, and dreamed of becoming an actress. In high school, she was voted “Most Likely to Succeed”. She went to college in Nashville, married her high school sweetheart, but fame was still her dream, and she soon divorced and moved, first to California, then New York City.

In 1950, she was walking along the beach in Coney Island, when she caught the attention of a photographer, who suggested she become a pin-up model. It was this photographer, Jerry Tibbs, who suggested she wear her hair with bangs, to prevent the light from shining on her forehead during shoots. This look became Bettie’s trademark. Her lack of inhibition while posing made her a hit in such men’s magazines as Wink, Titter, and Eyeful (pictured below). 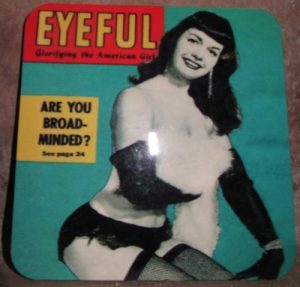 From 1952 to 1957, she posed for filmmaker Irving Klaw, in a series of pin-up and bondage-related stills and movies. (We’ll be screening Bettie’s films for Klaw at our Pageorama event on August 6th.)

Meanwhile, Bettie continued to pursue her dream of becoming a serious actress, talking classes at the famous Herbert Berghof Studio. She appeared on television shows and off-Broadway, as well as in three burlesque films.

In 1954, she met photographer Bunny Yeager in Florida, and posed for some of her most iconic images: wearing a leopard-print swimsuit and posing with real cheetahs.

In January 1955, she was “Playmate of the Month” in Playboy magazine. Soon she was named “Miss Pin-up Girl of the World”. But in 1959, she became a born-again Christian, and retired from modeling.

The rest of Bettie’s life was out of the spotlight, and was occupied by missionary work, several marriages, and nervous breakdowns. She passed away of a heart attack in 2008. But it was her 10 years in the modeling business that created a look that still inspires the fashion world: that hair-do, seamed stockings and high heels, and those leopard prints.