Who’s the kid in the dressing room? He’s from the Buster Brown shoe store! 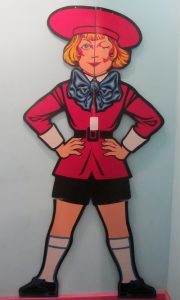 Our younger customers wonder about the five and a half foot wooden figure hanging in one of our dressing rooms. They ask, “Who’s that girl?” But it is a boy, and his name is Buster Brown. I remember Buster from the Buster Brown shoe store from my childhood, but I never knew his history. Our wooden Buster Brown is a the base of a vintage shoe display (and yes, he is for sale).

But did you know that he started as a comic strip in the New York Herald 1902? He was created by Richard F. Outcault, who also created the famous Yellow Kid. In 1904, he was adopted as the mascot for the Brown Shoe Company.

Did you know that Buster Brown was based on a real person? His name was Granville Hamilton Fisher, and he was from Flushing, NY. Granville had the famous page boy haircut (which is why some folks think he is a girl). They changed his name to “Buster” because of the popularity of comedian Buster Keaton. Buster Brown had a girlfriend, Mary Jane, who was based on Outcault’s daughter of the same name. His dog Tige completed the famous trio.

Buster was a pretty boy with rich parents, but he was mischievous and a practical joker. He would get in trouble, get spanked by his mother, but it’s unclear if he ever repented.

You think that comics are widely merchandised now? In 1904, Outcault took Buster to the World’s Fair and licensed him to 200 different companies. That is when he was signed to represent the Brown Shoe Company. From 1904 to 1930, the company hired little people to play Buster in stores and theaters (not very P.C.). Buster got his own comic book as a shoe store giveaway in the 40’s & 50’s. He made a brief reappearance in the Buster Brown shoe store ads in the 80’s and 90’s. The Brown Shoe Company is still in business, but it is now called Caleres, and they also own Naturalizer and Dr. Scholl’s, among other brands.

Here’s a vintage Buster Brown TV commercial from the 1960’s.

I had no idea of Buster Brown’s rich history until I saw the exhibit on him at Geppi’s Entertainment Museum in Baltimore, MD. So who’s the kid in our dressing room? Now you know! 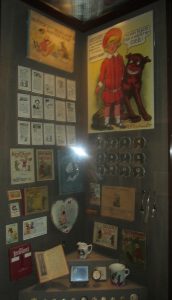