It’s Throwback Thursday, with another flashback to the Court Tavern New Brunswick.

Welcome to Part 3 of the lost article on the New Brunswick, NJ music scene, circa 1983.  This week we’ll be looking at a couple more of the bands that played at the Court Tavern in its heyday, and checking in at WRSU. If you missed part one or part two, there’s still time to catch up. 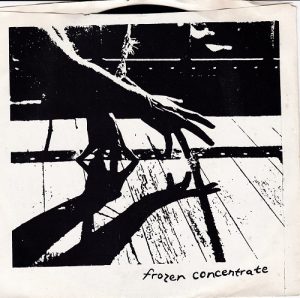 Frozen Concentrate’s single “Too Many Lives”

One of the earlier bands to play at the Court Tavern was Frozen Concentrate.  This band has been together for a little more than a year, but band members Tina Maschi and Amy Wolk are no strangers to the New Brunswick music scene.  As members of the ground-breaking Celibate Sluts, they and the Rockin’ Bricks were practically the only bands playing in New Brunswick three years ago.

Tina Maschi stresses that Frozen Concentrate’s “bluesy, soothing, spacey, jazz rock” sound is worlds away fromthe off-color, punkish rock of the Celibate Sluts. It is also extremely dissimilar from the music of any other New Brunswick-based band.

“All the bands have a different approach, ” says Rutgers station WRSU deejay and producer of the band the Null Set, Matt Pinfield.

Maschi writes the lyrics to Frozen Concentrate’s songs, and the music is a collaborative effort. The band’s single “Too Many Lives” was released in January, on their own in-town label “Melted Records”. With most of Frozen Concentrate living in New Brunswick, they enjoy playing for Hub City crowds.

Frozen Concentrate’s horizons are not limited to New Brunswick. There is talk of touring places like California and West Germany. “New Brunswick is a great starting place,” Maschi says. 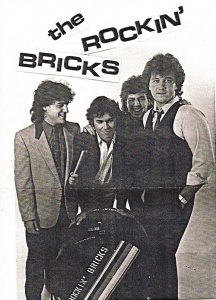 “You’ve got to realize that a few years ago, there was no music scene in New Brunswick,” says Pete Tomlinson, guitarist for the Rockin’ Bricks. “When we started, there was no place to play. Now there’s three: two full-time clubs, Patrix and the Court; and the Melody has bands sometimes. There’s a lot of bands around–hundreds it seems–they just came out of a vacuum.  And it’s like all of a sudden it exploded.”

Tomlinson is somewhat of an expert on area music. In addition to his local band experience, he writes the rock music column for the New Brunswick Home News, and is assistant manager of Cheap Thrills record store.  He is the kind of person WRSU music director Steve Maffei refers to when he talks about New Brunswick “scene makers”. Because they devote much air time to local music, WRSU (88.7 FM) is a prime factor in the New Brunswick music community. Many WRSU deejays are heavily involved in the band scene. Maffei reports that the listeners seem to love hearing local groups; the Rockin’ Bricks were even included in their “Top 88 Hits of 82” listener poll.

The Rockin’ Bricks continue to be one of New Brunswick’s most highly regarded bands. Their shows still amuse and surprise even their most loyal fans, with their wise-cracking dialogue between songs and their inclination to break into a polka in the middle of a sixties classic for no reason at all. The band’s special pop sound can be heard on last year’s four-song EP “Having A Wild Weeknight” (on “Major Label” records). A new record is due out by September.  The Rockin’ Bricks have the distinction of being one of the few bands to have each member do some songwriting, and are also on the the few to have played at all of New Brunswick’s original rock clubs: The Court Tavern, Melody Bar, and the newest addition to the club scene, Patrix.

Coming up next week, in part four: playing at Patrix,  and  D.P. & the Greys

Take a trip back on our blog every Thursday for the rest of the article.