It’s time for the fall edition of Asbury Underground 2019!

Once again the shops and galleries of Asbury Park will be full of music for the October Asbury Underground 2019.  There will be over 150 performances in 30 venues. Join us for 3 amazing artists at Backward Glances:

At 2:00, we’ll be hosting Tim Motzer in our performance space on the lower level. Tim has been touring the world for over 22 years, and just got back from England. He’s released five solo albums and multiple colloraboration. Tim is widely known for his distinct textural acoustic-electro guitar voice utilizing looping, bowing, electronics, and prepared techniques. Tim‘s work has appeared in the hit HBO series True Blood as well a major motion picture directed by Michael Mann.  For over a decade, he has served as a live accompanist/composer for master choreographers at the University of the Arts in Philadelphia. This will be one of the most interesting performancews we’ve had. Check out his looping technique here.

At 3:50, come down and see Asbury Park neo-folk artist Rick Barry. Rick’s song “Courage for a Rainy Day” won the John Lennon songwriting contest! He’s had rave reviews in cities across North America! We’re lucky to have him in Asbury Park, so don’t miss this intimate performance in our concert space.  Here’s a video of Rick performing live at Lincoln Center in New York City.

Our final act for the day will be at 4:50: Josh Zuckerman. Raised in St. Louis, Missouri, Josh first started on the violin at age 8, then went on to guitar and piano.  After gigs in several cover bands, Josh relocated to New Jersey where he began to compose his own melodies and lyrics. He performed extensively with his former band China White  from 1990 to 1996, then played with Up with People for 2 years while establishing his solo career. Josh has put out 6 albums and plays internationally. His newest album is “Gone With the Music”. Watch this wonderful video with an 80’s flashback!

BUT WAIT–there’s more! There will be bands upstairs in the Shoppes at the Arcade building as well. You can run between Motion City Media on the upper level and our acts on the lower level, and see 8 acts without leaving the building! See Frank Lombardi at 1:30, Billy Hector at 2:30, Avery Mandeville at 3:30, Paul Rosevear at 4:30, and Ian Coletti at 5:30.

See you on October 19th! 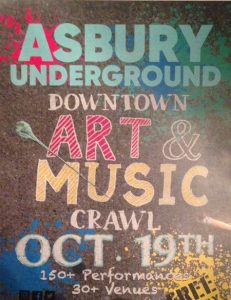