It was a bittersweet day when we said “Goodbye” to our vintage jukebox. 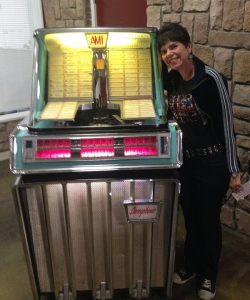 After 28 years, our 1959 vintage jukebox is off to its new home in Sweden.

It was such an important part of Backward Glances, I had to write a post about it.

I’d always wanted a jukebox for my store. When I was a teenager, there was a clothing store in Middlesex Mall in South Plainfield and they had a jukebox.  I thought that was the coolest thing.

Did you know that the well-known turquoise and pink AMI was the 3rd jukebox in our store?  The first one I bought was big and orange and black. It was from the 70’s, and should have been in a bar with a shag carpet and paneling. I never could get it to work properly.  Got rid of it pretty fast.  Then there was a 1953 AMI that I was selling on consignment.  It didn’t always reject the records properly and smashed a few of my 45’s.  I gave it back to the owner.

But just like Goldilocks, the 3rd jukebox I tried was just right.  I loved the lights and the 50’s colors.

When I started my website back in 1995, the jukebox inspired the design.  We used song title strips for people to pick the various departments, just like choosing a song on the jukebox.  We weren’t able to replicate that in later web designs, but we still use the jukebox colors on backwardglances.com. 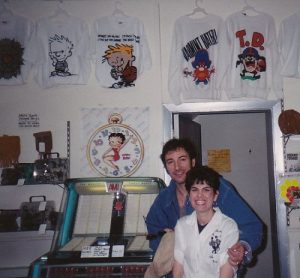 Me and Bruce, posing by the box at the Monmouth St. store

Later, when I moved from Monmouth Street to Broad Street in Red Bank, we wheeled it down the street to its new home.  Backward Glances was now painted turquoise and pink in its honor, and it’s the color scheme we still use today in Asbury Park.

When we arrived in Asbury Park, I loaded the jukebox with as many 45’s by New Jersey artists as I could find, ranging from the Four Seasons to Bonjovi. Of course, there were many local AP acts. That was a fun project.

The jukebox even took a stage job! It appeared in a production of “Always Patsy Cline” with Sally Struthers at the Algonquin Arts Theater.

Over the years, it’s been a backdrop to many people’s photos. I loved seeing parents showing their kids what a record is, and watching couples dance to their favorite song. But I couldn’t keep up with the needed repairs, so it was time for it to move on. 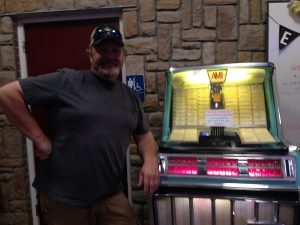 So on to a man cave in Sweden! We hope Robert loves it as much as we did. Adjo and farval, old friend*.

(*that’s “goodbye” and “farewell” in Swedish)