Let’s dive into the complicated history of Betty Boop.

Betty Boop has been in the public eye since 1930. But who is Betty Boop, really? That’s a loaded question. Let’s take a look a the true history of Betty Boop.  This simple cartoon girl is very complicated.

Betty made her first appearance in a 1930 cartoon called “Dizzy Dishes”, created by Max Fleisher.  She seemed to be a caricature of the wild flappers of the era.  But where did Fleisher get the inspiration for Betty Boop? Believe or not, in her first cartoons, she was a French poodle, not a human at all!

Within a year, Betty has become completely human. She had the characteristics we all know now: sexy dress, hoop earrings, cute button nose, and baby voice.  That’s where her origin gets murky. Betty has many similarities to singer Helen Kane, who was famous for her baby voice, short curly hair. and “Boop Oop a Doop”.

But Helen didn’t like it, and sued Fleisher and Paramount.  When the case went to court, Fleisher said that he based Betty on several different flappers. The lawyers showed that Kane herself had taken her style from black performers of the day, including Baby Esther Jones. The court ruled that Kane could not claim ownership of Betty Boop or her characteristics, since none were unique enough to her that they could be deemed her intellectual property.

Neither Kane nor Jones provided Betty’s voice. That was mostly done by Mae Questel, who also was the voice of Olive Oyl.  Mae even did Betty’s voice in 1988’s”Who Framed Roger Rabbit” (starring another sexy cartoon, Jessica Rabbit).

But Betty was not out of trouble yet, In 1934, the national League of Decency imposed rules on the motion picture industry, and Betty had to give up her short, sexy dress in favor of a fuller dress or long skirt. Winks, shaking hips, and hoop earrings were gone, too. They gave her a boyfriend and a puppy.

Luckily we can still see the original 1930’s Betty Boop cartoons, and the Betty who appears on t-shirts and other merchandise is the sexy flapper that we love. 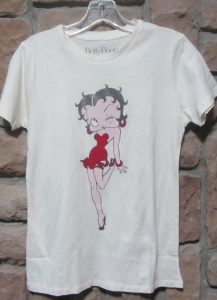