Time for another update on New Brunswick bands reunited, and friends lost:

Our series on New Brunswick, NJ music of the 1980’s led to one of the bands reunited, and we were there to witness it. The Rockin’ Bricks got back together at the end of December for one show. It was a great night, with five Bricks playing. In addition to Pete Tomlinson, Chris Breetveld, Dino Dimartino, and Joe Hosey, they were joined by keyboardist Tom Priester. Priester played in the earliest version of the Rockin’ Bricks, before Hosey joined the group. So this was a line-up that never existed in the Bricks heyday, and they sounded great. You would have never thought that this band had not played together in over 30 years. 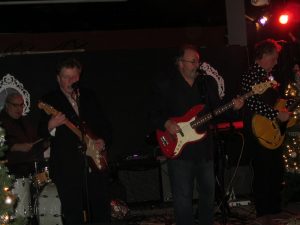 The band played all of the songs from their E.P. “Having a Wild Weeknight”, plus other original fan favorites like “Conditional Romance”, “Hey Linda”, “Hit the Gas” and more.  It was fun to hear their cover of the Beatles “You Can’t Do That” again. Just like back in 1982, the set ended with the Flamin’ Groovies’ “Shake Some Action”.  It was almost like being at the Court Tavern again.

Since this is a fashion blog, I must point out that Joe Hosey looked especially mod in his vest and polka dot shirt with cuff links (that I helped him fasten). And I got a shout out for inspiring the reunion in this blog. 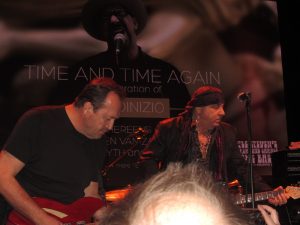 Jim Babjak and Little Steven at the Pat DiNizio tribute

The night was a little bittersweet, because the week before we suddenly lost Pat DiNizio, lead singer of the Smithereens, at age 62.  The Smithereens were the success story of the Court Tavern days, and Pat was friend to many.  The band had just recently reunited with their original bass player, Mike Mesaros. Tour dates for 2018 had been announced.  A show planned for the Count Basie Theater in Red Bank on January 13th became a tribute to Pat DiNizio. Many of Pat’s contemporaries showed up to do guest vocals, and all the Smithereens each took a vocal as well. The night began with this wonderful tribute video. 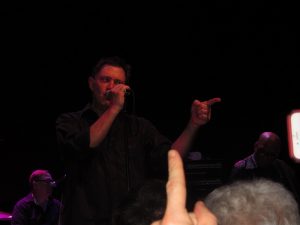 There will be another tribute to Pat DiNizio, starring Jim Babjak and the Gripweeds, back where it all began–at the Court Tavern in New Brunswick on Saturday, February 3rd.  The Gripweeds played at the Court Tavern later in the 80’s, and were mentored by the Smithereens. Drummer Kurt Reil produced several Smithereens albums.  There will be an all-star jam, featuring members of many local bands, including the Rockin’ Bricks.  All proceeds will go to Pat’s mother to help pay his medical bills and burial expenses. Hope to see you back at the Court Tavern.

You can get information on Blood and Roses: the Court Tavern Memorial to Pat DiNizio here.