Where were you in 1983? I was hanging at the Court Tavern.

Back in 1983, I was a young writer, selling articles to mainstream New Jersey magazines. I was also an avid rock n roll fan (still am!) and wrangled an assignment to do an article on the happening music scene in New Brunswick, NJ. I interviewed the musicians on the scene and owners of the clubs such as the Court Tavern, Patrix, and the Melody Bar.  Because of changes on the editorial staff of the magazine, this article was never published. UNTIL NOW!

Asbury Park is now booming like New Brunswick was back then. And with the original 4 Smithereens set to play the Wonder Bar in Asbury Park on July 2nd & 3rd, it seems like a good time to take a trip back 34 years . . . 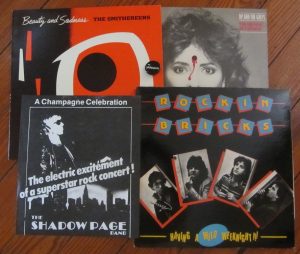 Something musical is happening in New Brunswick.

Literally, the signs are everywhere. All over town, on every empty wall, lamp post, and bulletin board, the passerby sees band advertisements. The names are catchy but probably unfamiliar: Frozen Concentrate, Jigs and the Pigs, the Shadow Page Band, the Null Set . . .

There’s a good possibility that even if you’ve never heard of these bands, you will be hearing a lot of them in the future. They are a few of the many acts currently playing original music in New Brunswick’s new and expanding night clubs.  They may well by on their way onto the Billboard charts themselves, but you can see these bands at clubs like the Court Tavern, Melody bar, and Patrix right now–for little or no cover charge. New Brunswick is not just for college students. It’s the happening place for anyone who likes music.

The Court Tavern, at 124 Church Street, has been having live music since October of 1981. As one of the first places in New Brunswick to host original bands, it has built its reputation on two things: its relaxed atmosphere, and policy of no admission–ever.  Currently the Court Tavern has bands Wednesday through Sunday nights.

“I was really surprised at the amount of bands there are,” says Court manager Bob Alpert. “I’ve got a list of like seventy bands that have played here. There’s a lot of talent in New Brunswick.”

The Court Tavern has two floors: the upstairs, nearly empty on band nights, is a pleasant place to get away from it all, have a drink or order some food.  Downstairs, the scene is totally different. It is apt to be packed on band nights. The main room containing the bar and the stage has few seats, but the objective there is to dance.

“Our crowd is pretty eclectic actually,” says Bob Albert. “I’d say the majority of our crowd is one or two years out of college.”

Renovations will be done within a year in the band room to allot more dancing space by moving the bar and stage. However, no one really minds the way it is now. The close quarters promote more camaraderie between the patrons, and between the audience and the band. The general atmosphere is like going to a private party, with all your friends.

“I love playing the Court because it’s small and everybody comes here to have a good time and dance,” says Mike Mesaros, bassist for the Smithereens. “It’s like here the band and the people melt into each other. They all have a good time.”

Coming up in part two of “New Music”: meet the Smithereens.

Visit our blog each week for more installments on Throwback Thursdays, as we meet the bands and visit the venues of 1983.