Hope you’ve enjoyed this look back.  When I wrote this article, I didn’t expect the music in the 80s to be such a big thing 34 years later.  Like 80’s fashion, it may seem a little dated but also reminds us of the good times of our youth. I spent my twenties hanging out in New Brunswick, NJ, in a music scene that seemed about to break nationally. If you need to review parts one, two, three or four, you can click here.  Let’s go back one more time . . .

Cheap Thrills record store owner Steve Kaplan reports that D.P. and the Greys’ album is one of their strongest selling independent records. Kaplan says that “indie” records do very well in his store, and that people do come in and ask for them. As manager of the Shadow Page Band, Steve Kaplan has a large interest in original music.

The Shadow Page Band is one of the newer groups on the New Brunswick scene, having only been together since September of 1982.  They have spent recent months working on an album entitled “Page One”. They hope that this will cause the group to be signed by a major label company. “I won’t sleep until we are, ” says Steve Kaplan. 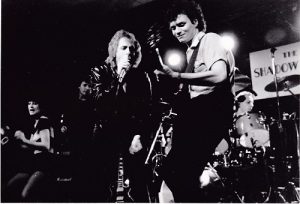 Lead singer Shadow Page is a bit of a celebrity. As a teenager, he was drummer and vocalist for the bubblegum group The 1910 Fruitgum Company, which hit the top ten in 1968 with such songs as “Simon Says”.  At the time, he was known as Floyd Marcus, and wrote many of the group’s B-sides.  Currently, Shadow Page writes most of the material for his band.  Kaplan describes the Shadow Page Band’s sound as “mainstream, top-ten pop, like Styx, Journey, or Foreigner. ”

Part of the Shadow Page Band’s reputation is their flair for giveaways.  The band regularly hands out Shadow Page Frisbees, t-shirts, buttons . . .  At a Hoboken show in April, they threw five hundred dollars in cash into the audience as early tax refunds.  Kaplan says that “the whole idea of the show is to turn the evening in to a party. Shadow’s concept is to get the audience involved.”

However, Patrix and the Court are not the only places in New Brunswick that have live music. The Melody Bar, at 106 French Street, has live music on a weekly or bi-weekly basis on either Wednesday or Sunday nights.  With or without live bands, the Melody is considered the trendy place to have a drink. Manager Chris Butler says that the crowds that come there are “diverse”. No cover is ever charged.

For a change of mood, one can go to Rhyan’s, at 392 George Street. Just two blocks away from the Court Tavern, they are miles away in terms of style.  With its old-fashioned elegance, and cover bands ranging from soft rock to Irish music, Rhyan’s is the final proof of New Brunswick’s musical diversity.

What is ahead for New Brunswick musically? Most people tend to agree that it will develop even further.

It’s going to grow, ” says Mike Mesaros of the Smithereens. “This town–I think it’s bubbling. Bands from this town are going to be recognized.”

Amy Wolk of Frozen Concentrate says, ” I think there’s going to be more and more clubs opening up. New Brunswick may become the Nashville or Liverpool of the area.”

Tina Maschi adds, “When the Beatles made it, all the record companies came in (to Liverpool) and picked up the rest of the bands. When one band gets a contract, it’ll help.”

Most people compare New Brunswick’s immediate future not to Liverpool, but Hoboken, NJ.  In the past few years Hoboken has gotten a reputation as a music center, through its well-known club, Maxwell’s. A Hoboken band, The Bongos, were signed to a major label and enjoyed some success.

“My old band played at Maxwell’s bout four years ago, ” says Pete Tomlinson. “And it was a lot like playing here now. The bands aren’t there to show off their clothes.”

New Brunswick has had its success stories in the past. The band Looking Glass, who had a number one hit in 1972 with “Brandy (You’re a Fine Girl)”, was composed of four Rutgers students who got their start playing locally.  Eddie Cooley, who wrote “Fever”, a hit for Peggy Lee, is from New Brunswick.  Yet it seems that this time around, New Brunswick music is ready to explode.

“One band will be the standard bearer, and get signed, ” says Pete Tomlinson.

In the meantime, you can see these bands before the rest of the country does.  This article highlighted five groups, but New Brunswick is overflowing with talent: The Ice Cream Men, Terry Hughes, Freddy and the Flinttones, Louie Louie, The Surfers from the Future, TMA, the Boogles, the Young Turks, The Mersey, Jon Waine, the Deed, Communicators, The Groceries, J.P. Gotrock . . .

“The bands are still accessible to the audience, not like in a big town like New York. Everyone can talk, ” says local musician and WRSU music director Steve Maffei.

“It’s only one town out of hundreds, ” Pete Tomlinson says. “But right now, there’s no other town in the state like it.”

Or is it?  We’ve got a 2017 update!  You can see it here and find out what happened to the New Brunswick scene makers and clubs in the past 34 years.

Are you mentioned in this article? Drop us a line at info@backwardglances.com and tell us your N.B. memories and what you’re doing now.