New Brunswick New Jersey Music: Where Are They Now?

Recently we published our long-lost article on New Brunswick, New Jersey music from 1983.  Here it is 34 years later, so we were wondering whatever happened to some of these bands, DJs, and  clubs that were featured in the article.  If you want to read the article it starts here.

THE SHADOW PAGE BAND:  put out their album in 1985 on Jerni Records. It was called “Hanging By A Thread”.  Shadow later returned to his original name of Floyd Marcus, and returned to the 1910 Fruitgum Company. In 2007, they put out the “Bubblegum Christmas” album. Floyd left the band in 2008. He is now living in South Jersey, and is a solo performer.

D.P. & THE GREYS: Most of the Greys later joined the Hub City Allstars, and Andy B (later of the VooDUDES–our Asbury Park Mardi Gras favorites) became their lead singer.  Danny Petroni now plays the blues. After Hurricane Sandy, he formed the Blue Project, to create work for local musicians with a locally produced blues record, using his own compositions.   They gig around NJ and NYC, and are based in (of course) Asbury Park.  Here they are playing up in Harlem.  Petroni’s new album “Run Mindy Run” will be released in October. You can visit his website here.

THE ROCKIN’ BRICKS: The Rockin’ Bricks broke up in 1983, soon after this article was written. Hope for a reunion has been dashed many times over the years.  Bass player Chris Breetveld put out several albums as “the Breetles“. Guitarists Joe Hosey & Pete Tomlinson each had tracks on the 1986 album “The East Coast 60’s Rock & roll Experiment” (which featured many New Brunswick bands).

“Scene maker” Tomlinson went on to record three albums with the Blood Rush Hour. In 1998 he showed off his extensive musical knowledge by winning the national Rhino Records Musical Aptitude Test. Pete was featured prominently in the 2013 Big Star documentary “Nothing Can Hurt Me.” He is now retired and living back in N.J.

JIGS & THE PIGS: are one of the two bands from the 1983 New Brunswick scene still playing.  You can see them at clubs like the Brighton Bar in West Long Branch and Roxy & Dukes in Dunellen.  Leader “Jigs” Giglio hasn’t lost his punk edge after all these years.  Here they are playing a few years ago.  You can also catch Jigs doing his interpretive dance to “the Twelve Days of Christmas” at Glen Burtnik’s Xmas Xtravanganza shows. It’s always a crowd favorite. 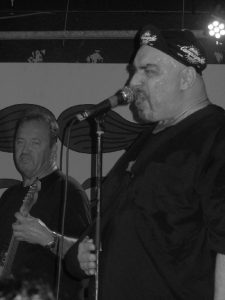 THE SMITHEREENS: are the New Brunswick success story. Signed to major label Capitol Records in 1986, they went on to record seven albums of original material over the years, as well as tributes to the Beatles and the Who. Two of their singles charted in the top 40. They returned to the Court Tavern to record a greatest hits live album in 2008. They still tour, and are no longer just considered “Jersey Music”–they are billed as “America’s Band”.

Original bass player Mike Mesaros left the band in 2006, but has recently rejoined and the band is planning a new album with the original lineup.  The Smithereens recently played two sold out dates at the Wonder Bar in Asbury Park. Here are a couple of photos from those shows.

PATRIX: Unfortunately, this club only lasted a few years on the N.B. scene. It was the site of a well-reported sit-in by Bruce Springsteen with the John Eddie band in 1984. Owner Pat Fasano moved to Asbury Park and opened up the Bond Street Bar in 2009.  Bond Street was joined by Capitoline and Loteria in 2016 to make up the Complex. All three fulfill Fasano’s philosophy of an inexpensive, quality “simple menu” that he visualized back in 1983.

THE MELODY BAR: became a legendary hangout in New Brunswick.  Known for its DJ sets by Matt Pinfield and sets by the Slaves of New Brunswick, it closed in March 2001. Several reunions of Melody Bar patrons and DJ’s have taken place since.

MATT PINFIELD: is another N.B. success story. After his time at WRSU, he became a DJ at WHTG for 10 years. From 1995 to 1999 and 2011 to 2013 he was the host of the MTV show “120 Minutes”. In 2001, Matt became Vice President of A & R and Artist Development for Columbia records. Matt was honored by the Rock n Roll Hall of Fame in 2008 for his accomplishments in the music industry. In 2016 he published a memoir “All These Things That I’ve Done: My Insane, Improbable Rock Life”. He still works in radio for Sirius and Cumulus.

THE COURT TAVERN: has been declared dead numerous times. It almost closed in the early 2000’s when the city of New Brunswick wanted to build a high rise in its location, but it survived. In 2009, it almost closed due to back taxes. A benefit concert was held at the State Theater starring the Smithereens and Patti Smith, and it survived.  In 2012, it closed, but a new owner purchased it, and it was back.  It closed briefly again in 2015, then reopened a short time later with new management.  The Court Tavern may survive the apocalypse. In 2017, the Court Tavern is still rocking!

BUT THERE’S MORE:  One of the bands is reuniting! Read our update from November 2017 here.