We will miss Scotty Moore–you know him as Elvis’s guitar player.

Scotty Moore died Tuesday at age 84. As Elvis’s guitar player, he influenced generations to come. I had the pleasure of meeting Scotty in 2008. Of course, we talked about fashion.

We talked about how he got hooked up with Elvis. Scotty persuaded Sam Phillips of Sun Records to record his group, the Starlite Wranglers. Sam recommended this young ballad singer with a weird name. He called Elvis and invited him to his house to meet him.  This happened on the Fourth of July, 1954–62 years ago this week.

He told me that the first thing he noticed were Elvis’s clothes.  He didn’t dress like other guys. He was wearing a black shirt, pink pants, and white shoes. Scotty said that you didn’t see men dressed like that; pink was a girl’s color!

Nevertheless, he arranged to do a studio session at the Sun Studios the next evening. Scotty told me that he didn’t think it would lead to anything, the kid was nothing special. It was a just a gig, and he would go to work the next day like any other day. But something magical happened when the band started fooling around with “That’s All Right Mama” on the break. And the rest is rock and roll history. 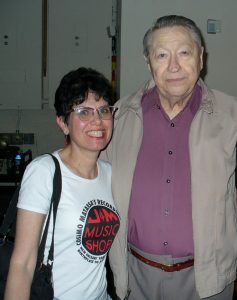 Suddenly, Scotty Moore was Elvis’s guitar player, and a week later became his manager. He got over his initial shock at Elvis’ appearance (and judging by the lavender shirt in the photo above, his aversion to men wearing pastels!) Scotty, Bill Black, and DJ Fontana became the Blue Moon Boys. They backed Elvis on dozens of legendary records over the next decade, and appeared in four of Elvis’ films. In 1964, he was fired when he recorded a solo album. However, Elvis and Scotty reunited in 1968 for the Comeback Special (oh, that leather outfit!)

Scotty was a humble man, and downplayed his role as rock and roll innovator. However, many famous guitar players that followed cite him as the reason they picked up a guitar. “Everyone wanted to be Elvis, I wanted to be Scotty,” Keith Richards is quoted as saying.

To hear Scotty Moore with his disciples, pick up a copy of the 1997 CD “All The King’s Men“. This recording pairs Scotty and DJ Fontana with The Band, the Mavericks, The Bodeans, Ron Wood, Jeff Beck, Cheap Trick, Steve Earle, Joe Ely, Joe Louis Walker, and Keith Richards. Scotty was 65 at the time, and sounds wonderful.

In the meantime, you can watch this video of “Hound Dog” from 1956. Check out Scotty’s solo. The video is in black and white, so we don’t know the color of Elvis’ suit. I’m sure it was fantastic. 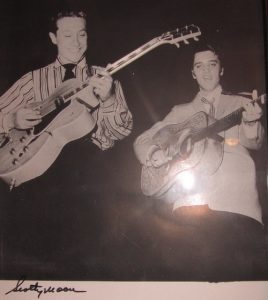