Let’s go back to the 80’s with Jim Babjak, Mike Mesaros, Dennis Diken, and Pat Dinizio, AKA The Smithereens.

Welcome to part 2 of my previously unpublished article on the New Brunswick, NJ  music scene, written in 1983. In part one, we visited the Court Tavern, the happening spot for independent bands.  Now let’s find out about these guys who are playing there once a month, the Smithereens. (I’ll reveal the ending–they are still together and are playing the Wonder Bar in Asbury Park on July 2nd & 3rd!) 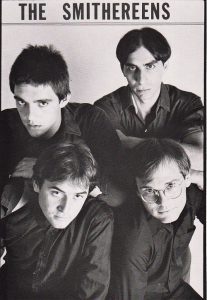 The Smithereens are perhaps typical of the type of band that plays at the Court. They have been together for three and half years, but like most original groups, each have at least ten years musical experience. Yet they are only in their mid-twenties.

The Smithereens have built a following around the state, and play quite often in New York City’s original music clubs, as many New Brunswick bands do.  Guitarist Jim Babjak lives in town, and owns a record store, Flamin’ Groovies, on Easton Avenue. However, the band only began playing the Court Tavern in recent months. They liked it so much that they have become semi-regulars.

On a Smithereen evening at the Court, you can hear the band perform the best of British music from the sixties, American surf instrumentals , the group’s joking tribute to a hamburger chain “White Castle Blues”, and of course, their snappy, professional-quality original songs. In short, anyone is in for a lot of fun.

Like many New Brunswick-based bands, the Smithereens have released their own records while awaiting major label connections. Singer Pat Dinizio does the songwriting. Both Smithereens records have been four-song EP’s, with the newest, entitled “Beauty and Sadness“, just released in June. Frequent plays of one song, “Much Too Much” on Rutgers radio station WRSU has already inspired a cover version by local copy band The Exceptions.  “It’s one of the biggest compliments you can get, ” says Babjak.

Original bands have to face the fact that they could probably be earning more money in a copy band, but they have chosen playing their own music as a career goal. “I think the only way to have a future is to do original music,” says Mesaros. “There’s a limit to how far you can go in a cover band.”

“Being in an original band gives you a sense of pride. And it’s a challenge to succeed with your own songs, amongst all the big supergroups,” Babjak says.

Drummer Dennis Diken states his hopes for the Smithereens’ future simply: “A recording career and a chance to play our own music.”

In the meantime, as Jim Babjak puts it, “The Court Tavern is a great place to play.”

Coming up in part 3:  Frozen Concentrate and the Rockin’ Bricks play the Court Tavern; & WRSU supports the local music scene.

And coming up in part 4 and beyond: the Melody Bar, Patrix, and more bands! Visit our blog every Throwback Thursday to read the complete article,