Did you ever wish you had a gold record? We’ve got one by the Hooters band for sale!

Here at Backward Glances, we love our rock and roll, and sometimes get some very cool rock memorabilia.

Remember the Hooters? The Hooters band from Philadelphia, not the restaurant chain with the scantily clad waitresses.

The Hooters were formed in 1980, by Rob Hyman and Eric Bazilian. They took the Hooters band name from a nickname for the melodica, a keyboard/harmonica hybrid-instrument. In the early 80s, the Hooters were big on the Philly club scene. But their big break was opening for one of the Who’s farewell concerts at JFK stadium in 1982.  In 1983, they recorded their first album, “Amore”, released on the independent label Antenna. Later that year, Hyman and Bazilian were asked to write, arrange and perform on a debut album by a female singer, formerly of the band Blue Angel.  That singer was Cyndi Lauper, and the album “She’s So Unusual” was a big hit. Rob Hyman co-wrote Cyndi’s #1 single “Time After Time”.

In 1984, the Hooters were signed to Columbia records. Their album “Nervous Night” was released in 1985. That album first went gold, then platinum, selling over two million copies world wide. There were three top 40 singles from “Nervous Night”, starting with “And We Danced” (which I think has one of the best rock n roll opening lines ever “She was a be-bop baby on a hard day’s night”). That song went to #21; “Day by Day” went to #18; and “Where Do The Children Go” reached #38. 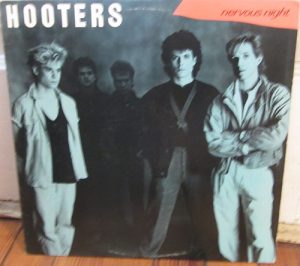 It’s the “Nervous Night”gold record that we’ve got here in our store. This record was presented to rock radio station WNEW-FM to commemorate their help in the record selling over 500, 000 copies. (The history of WNEW-FM is a fascinating one, but is too lengthy to put in this post. You can read about them here).

The Hooters band went on to be the opener at the 1985 Live Aid concert in Philadelphia, and gained international acclaim. In 1986, they played the “America Rocks” concert, celebrating the restoration of the Statue of Liberty and Ellis Island. Also in 1986, they participated in “A Conspiracy of Hope” Amnesty International concert. Their second major-label release “One Way Home”, came out in 1987. “Zig Zag” and “Out of Body” followed. In 1990, they joined Roger Waters of Pink Floyd to perform “the Wall” concert in Berlin.  But in 1995, the Hooters decided to take a hiatus to pursue individual projects.

After six years, the Hooters reunited, and they still play today. They put out an album of all new material “Time Stand Still” in 2007, and a five song EP in 2010, followed by a thirtieth anniversary tour. Their most recent gig was at the Keswick Theater in Glenside, PA in November.

If you are interested in owning this piece of rock and roll history, it consists of a gold record, gold cassette (it was the 80’s after all), and gold plaque in a frame, measuring 20 1/2 inches by 16 1/2 inches.  The price is $75. Come on out to our Asbury Park store and see it for yourself. 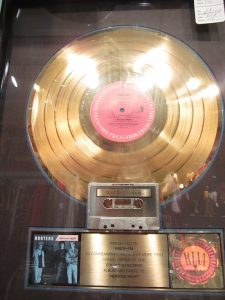