All the Gatsby styles and gangster clothes you need for your own personal Boardwalk Empire. 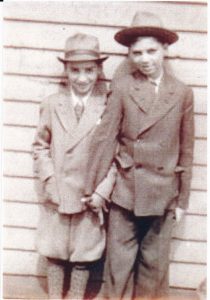 When you think of gangster clothes, you think of the mythical American gangster, involved in organized crime during the Prohibition era of the 1920’s. Think of the double-breasted suits and fedora hats worn by Edward G. Robinson in “Little Caesar”, James Cagney in “Public Enemy”, and Paul Muni in “Scarface”. Although these films were released in 1931 and 1932, they’re a great way to study the fashions of the twenties and early thirties.  Or you can binge-watch “Boardwalk Empire. Nucky Thompson may have been an anti-hero, but he certainly was stylish, and HBO got the gangster clothing styles right.

Don’t forget about “the Great Gatsby”, written in 1925. F. Scott Fitzgerald was inspired by parties he attended in Long Island. The novel has been filmed in its original period fashions five times, starting in 1926, up to the 2013 Leonardo DiCaprio adaptation.

So whether you want to be a gangster or a good guy, we can help you find your 20s clothing style with jackets, pants, hats, ties, and other accessories. Check them out below: