Have you been watching HBO’s Vinyl TV Series?

If you are into 70’s music and fashion, you have to check out the Vinyl TV Series.  Created by Martin Scorcese and Mick Jagger, it takes place at a fictional record company in 1970’s New York, along with flashbacks to the sixties.

We’d been waiting for this show to premiere, ever since their set decorators visited our building almost two years ago. We were thrilled to have them choose some vintage clothing from Backward Glances to decorate Devon Finestra’s bedroom, as well as some of our vintage magazines, radios, and other items for set decor. The Vinyl team bought lots more things that you may see when you watch the show from our neighbors inside the Shoppes at the Arcade building: records and books from Groovy Graveyard, and furniture and vintage electronics from Flux Modern.

The Vinyl production team paid attention to every detail in recreating this period.

As someone who lived through the 70s, and has been in the vintage business for 30 years, I know that they worked hard on the costuming. From Richie Finestra’s elegant suits to the outrageous looks of funk star Hannibal and his entourage, they have it right down to the shoes and sunglasses.

Vinyl has already been renewed for a second season. Here’s hoping that the production team will be back in Asbury Park. Backward Glances would love to help create the next year at American Century! 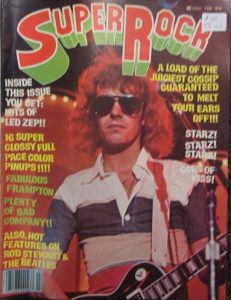